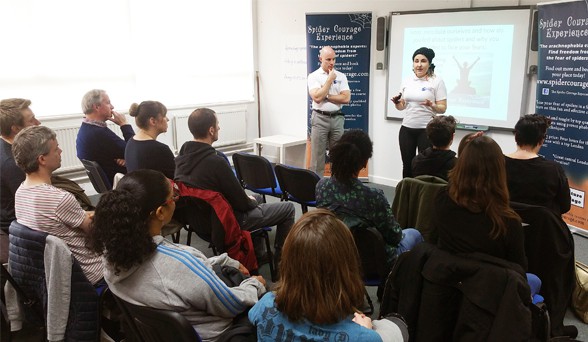 Our Spider Courage Experience workshop is one of the most comprehensive and effective arachnophobia treatments in the country, you will not get better value in techniques, price and support. People can get over their fear of spiders in just a few hours whilst learning a variety of powerful psychology techniques to get over the phobia for good!  We have hundreds of testimonials to prove our incredible success, check out some of them on our Testimonials Page and our Spider Courage Facebook Page.

We have transformed hundreds of arachnophobe’s lives with our powerful and proven methods that uniquely combines several different phobia fighting techniques that enables people to break free of their fear of spiders in just one session.  Using a combination of cognitive behavioural therapy, (CBT) Neuro Linguistic Programming (NLP) hypnotherapy, education, art therapy and immersive therapy, not only will you get over your fear of spiders but learn how to build your overall confidence and courage.

The Spider Courage Experience has been featured on Sky News, various ITV programmes, BBC Radio 2, Good Morning Britain with Piers Morgan, cured celebrities, worked in collaboration with Chessington World of Adventures and is the only business endorsed by the British Tarantula Society! Scroll down below to see our filming with Good Morning Britain and James Jordan from Strictly Come Dancing who we cured of his fear of spiders. Be warned though there are spiders in this video!

Currently, we are doing private animal phobia therapy that can be booked for up to three people at a time (people who know each other) which will replicate our workshops but has the advantage of being completely tailored around your needs.

The prices are: £347 for 1 person, £650 for two people and £950 for 3 people. This includes 7 to 8 hours of life-changing therapy. Please call us on 0800 970 4417or send us a message on our CONTACT page to arrange a date for your therapy and for any bookings for 2 to 3 people as our booking system on our website is currently set up for people who wish to book for one place only.  You can book for one place on our Booking Page.

The therapy is based in Southwest London and run from 10am to around 6pm. And yes, we use house spiders not just tarantulas. (A common question!)

We are very generous with time and will work with you as long as you need on the day to achieve the results you want. We will request everyone attending to do a lateral flow test on the day and send the results to assure a safe environment for everyone.  We look forward to working with you and being part of your journey to freedom! 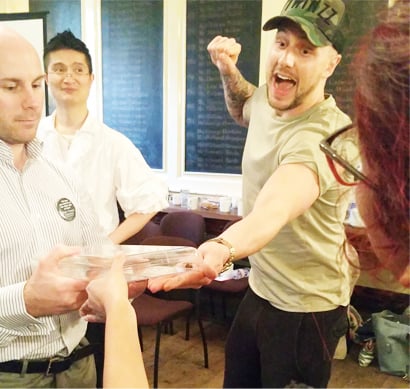 Endorsed By The British Tarantula Society

Creature Courage is really proud to be the first business to be endorsed by The British Tarantula Society, the world’s oldest ongoing tarantula society ! We have been endorsed for our dedicated passion for raising awareness and education about tarantulas and spiders with our highly successful  and professional spider phobia therapy, the ‘Spider Courage Experience.’  Tarantulas play a big role in our therapy as often people find them a lot ‘cuter’ than the house spiders so they are a great stepping stone to building a bridge to spider appreciation.

Peter Kirk, the chairman of The British Tarantula Society came along to a session and gave us a glowing review:

“I have attended a number of Spider Courage sessions run by Britain and her team. Honestly, I thought they were excellent. Very professionally run, full of accurate information about arachnids and extremely successful with tried and tested Neuro-linguistic programming and hypnotherapy techniques.

The spider-handling aspect of the therapy is carried out under carefully controlled and closely monitored conditions with the well-being of the spiders being of primary consideration.

I have witnessed first-hand individuals so phobic about spiders that the mere thought of them reduced these people to tears. I have seen the same individuals walk away from the course with that element of their lives changed beyond their wildest imagination.

I have been so impressed with this course that not only have I given it my own personal endorsement, but put it to the BTS Committee who have also, for the first time ever, agreed to endorse this event too.”    -Peter Kirk, Chairman of The British Tarantula Society.

Peter Kirk is now an official team member of the Spider Courage Experience, just another benefit of choosing us! 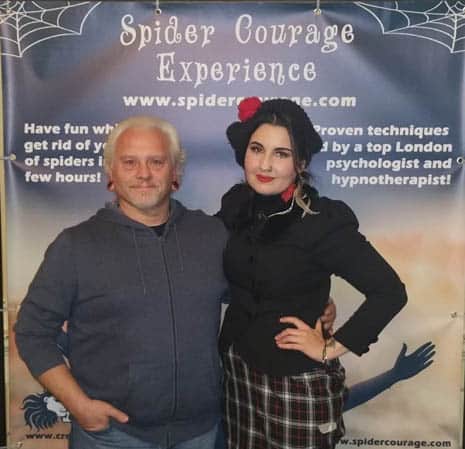