The Fear of Insects: Entomophobia 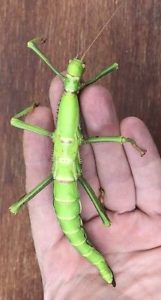 Someone with Entomophobia would have phobic panic reactions upon seeing an insect that frightened them. This could include feeling extreme anxiety, shaky, dizzy, sweaty, rapid heartbeat, and breathing, screaming, crying, even fainting. Having a fear of insects is very unfortunate as they are the most numerous animals on the planet outnumbering humans 200 million to one! About 80% of the Earth’s animals are insects with an average of 400 million insects per acre of land! We are literally surrounded by insects at all times.

However, insects also play one of the most important roles in our food chain and without them, life as we know it would collapse. The plants we consume and the plants that make the food of the animals we consume are almost all completely dependent on insects. Many other animals depend on insects for their food as well. So insects are a very needed animal! Insects are also an important source of protein for many humans around the world. Many scientists predict that insect protein is the food of the future as insects can be raised quickly, cheaply and are extremely dense in nutrients. Plus they have a much lower impact on the environment.

Though insects look alien and are not traditionally cute like a cat or a dog, we at Creature Courage think that one of the best ways to fight animal phobias is turning fear into fascination. Insects offer plenty of fascinating facts to help with this. Take for instance Ladybirds can each eat up to 5,000 aphids in their lifetime, what a helpful bug! Or Dragonflies have been on the Earth for over 300 million years! Grasshoppers have special organs in their hind legs that store energy just for jumping!  The honeybee has to travel an average of 43,000 miles to collect enough nectar to make a pound of honey! The common garden worm has five pairs of hearts! A butterfly has its taste receptors in its feet! The list could go on and on.

We not only use education but also the power of NLP, hypnotherapy, CBT and immersive therapy. Our powerful combination of proven phobia fighting techniques assures people have powerful breakthroughs in just a few hours. If you would like to get over your fear of insects in one of our group therapy or one on one sessions please CONTACT us. Why waste any more time feeling afraid when the solution is here?