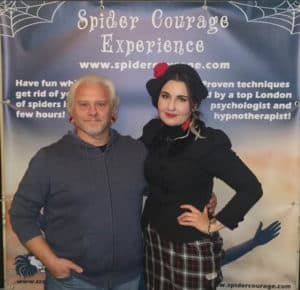 Peter Kirk, Chairman of the British Tarantula Society and Britain Stelly from the Spider Courage Experience

Creature Courage is really proud to announce that we have been officially endorsed by the British Tarantula Society, the oldest ongoing tarantula society in the world! We have been endorsed for our dedicated passion for raising awareness and education about tarantulas and spiders with our highly professional and successful spider phobia therapy the ‘Spider Courage Experience.’ Tarantulas play a big role in our therapy as people often find them ‘cuter’ than other spiders so they build an important bridge between spider fear and spider appreciation.

In just 4 hours, we help people go from hating spiders and feeling extreme anxiety around them to finding confidence and a newfound respect for them. Working with a top London Harley Street therapist we use a range of  proven phobia fighting techniques such as Neuro-Linguistic programming, hypnotherapy, Cognitive Behavioural Therapy, education and immersive therapy.

As my passion to start Creature Courage in the first place began with my love for spiders, this is a big honour for us. I met The British Tarantula Society at their big annual event the BTS Exhibition. I own many tarantulas and one of my tarantulas won best in show in their tarantula competition a few years back. I formed a connection with the team and told them how I was helping people overcome their fears of spiders and learnin

g to look at them in new positive ways. Peter Kirk the chairman of the British Tarantula Society said he would come check the Spider Courage Experience out for himself.

After attending one of workshops Peter was really impressed  and instantly personally endorsed our services.

“I have attended a number of Spider Courage sessions run by Britain and her team. Honestly, I thought they were excellent. Very professionally run, full of accurate information about arachnids and extremely successful, tried and tested Neuro-linguistic programming and hypnotherapy techniques.

The spider-handling aspect of the therapy is carried out under carefully controlled and closely monitored conditions with the well-being of the spiders being of primary consideration.

I have witnessed first-hand individuals so phobic about spiders that the mere thought of them reduced these people to tears. I have seen the same individuals walk away from the course with that element of their lives changed beyond their wildest imagination.

I have been so impressed with this course that not only have I given it my own personal endorsement, but put it to the BTS Committee who have also, for the first time ever, agreed to

endorse this event too.”

He  went back to the rest of the team to see if a possible endorsement from the BTS overall was possible. It had never been done before so it was something new in the history of the BTS.

The Spider Courage Experience is a great place to tell people more about the BTS as many people are curious about getting into the hobby after attending our workshops.

It’s amazing how people can go from hating spiders to actually wanting to own one in only a few hours! And being connected to the right support is really important so we at Creature Courage love the idea of a working relationship with the BTS!

After some well thought out discussions, The BTS team have chosen to endorse the Spider Courage Experience as their first ever endorsement and I could not be more honoured or proud. I want to thank everyone at the BTS and we really appreciate your positive support!  We will be also giving away BTS merchandise to all of our clients so we will be supporting and promoting the BTS alongside of our own therapy.

You can find out more about The British Tarantula Society at their website: www.thebts.co.uk