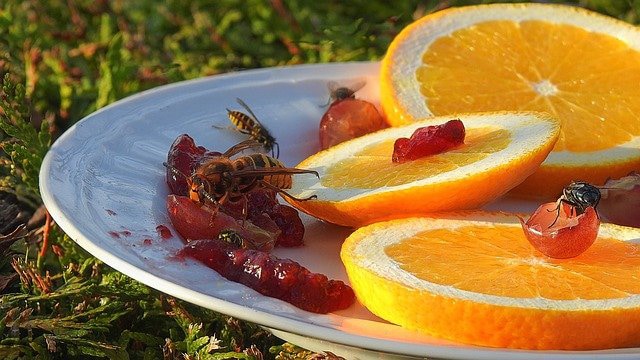 Yellow jacket, hornet, wasp, whatever name you know them by, their reputation is clear. These brightly coloured flying insects have been ruining picnics through the ages.  If you find yourself anxious and distressed at the thought of encountering wasps, you may have spheksophobia or a fear of wasps. People with spheksophobia may also have a general fear of insects, which is known as entomophobia and also mysophobia or the fear of pain.

The phobia is typically created when the phobic person has a negative childhood experience with wasps, witnesses a loved one being stung by a wasp or sees someone in the media or on a film getting stung, creating fear around wasps. As wasps are so common, many children are stung at a young age which easily creates the trigger for the phobia.

People who have spheksophobia may refuse to go outdoors, especially on a sunny day when wasps are likely to be most active.  They may also avoid going to a park, a florist’s shop, or places that have a lot of  trees, flowers, or bushes. The fear of wasps is likely more intense than the fear of bees as bees have a more friendly reputation with their honey making skills, but often people with spheksophobia have a bee phobia as well.

People with spheksophobia can get into a flight or fight mode when they encounter a wasp. They may also suffer from numerous symptoms upon encountering wasps. These include the urge to flee but remaining paralyzed due to fear, racing heartbeat, dizziness, nausea, faintness, or feeling detached from reality as they might believe that wasps may harm or kill them. Panic attacks are the most common symptom as phobic individuals experience a sense of powerlessness and doom.

Despite their fearsome reputation, wasps provide several benefits to the local ecology that are frequently unappreciated.  Wasps are impressive predators that eat many other harmful insects that can damage crops.  As such, they may be used by farmers as a chemical-free form of pest control.  Wasps also play a role in pollination, facilitating plant reproduction much like honeybees.  Plus, did you know that wasps know how to make paper?  They will chew up bark and regurgitate it into building materials for their nests.  Very few wasps are aggressive to humans and most will leave people alone if they’re undisturbed.

If you suffer from extreme or irrational fear from wasps, there is help available. Hypnosis is one technique that can resolve issues among affected individuals. It is one of the most tried and tested methods of treating this phobia. In the state of hypnosis, affected individuals can feel a sense of relaxation and peace. The process, in turn, can help you re-evaluate the stress or the underlying traumatic event catalyzing the phobia.

Another form of psychotherapy includes Neuro-Linguistic programming that can detect the brain’s faulty-matching ability, which leads to the fight or flight response.  The method can successfully help you ward off the symptoms of spheksophobia. You can also try other self-help techniques, including deep breathing, meditation, or positive visualization at the sight of wasps. Creature Courage can help you ground yourself to the situation and help prevent and relieve the anxiety experienced during the moment. At Creature Courage we combine many different helpful techniques into one session as this creates the highest success rate.

Fear can be crippling, particularly at inopportune moments and trying to adapt one’s life to the possibility of encountering wasps is frequently embarrassing and inconvenient.  Phobias can take over your life, but it is time for you to take control of your emotions.  Contact us at Creature Courage today to begin a life without a fear of wasps!