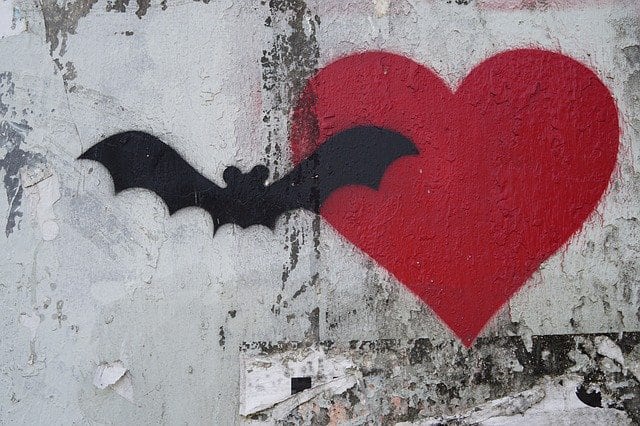 of bats is called Chiroptophobia. Bats have long been as a symbol of fear and evil. With many myths and legends surrounding them, especially with vampires, bats are known as creatures of mystery and the dark side. Much like spiders, they are an animal assumed by most humans to be automatically creepy and scary. However, a phobia of bats is still a learned, like all phobias.

It can be easy for a person to develop a fear of bats as a child because so many TV shows, cartoons, and films are portraying these animals as scary and evil. A child could watch a film that featured a bat in a terrifying way and then nightmares about bats. These sort of things can develop a phobic trigger of fear of them even though most people rarely even see bats in real life with them being shy and nocturnal creatures.

Though, it is not impossible for someone to have a real-life encounter with a bat. Sometimes bats make their homes in people’s attics and lofts when no other suitable homes can be found. Then a person might have a surprising encounter with bats as they usually live together in large groups. Upon finding them, they might startle the bats, causing them to fly around the loft and around the person’s face. Like with moths and butterfly phobias, the flapping and unpredictable movements of bats could then trigger a phobia.

Though bats have such a sinister reputation it is very underserved as the bat is an incredible creature that plays an important part of our Earth’s many ecosystems. They are also special as the only mammal that can truly fly. They can also be incredibly cute, especially fruit bats which almost look like a puppy in the face and are very affectionate to people who raise and rescue orphans or help injured adults. Bats do not attack humans or try to drink their blood (though one species does drink other animal’s blood) and they actually eat an incredible amount of harmful insects to humans like mosquitoes. They hunt in a very unique way using echolocation much in the same ways as whales and dolphins do, bouncing sound waves around to pinpoint prey with precision.

Bats are also very loving parents, usually only having one offspring at a time. They will give up their lives for their young and look after them for long periods before they become adults. Most bats are also very long-lived, even the small ones with some species living up to 30 years!

There are plenty of reasons to appreciate and respect bats and even find them fascinating. Even if you had one bad experience with a bat living in your loft or getting into your home, you will probably never again have such a problem as these sort of instances are rare and bats try to avoid humans whenever they can. Because of their excellent , a bat flying around will always be able to avoid a clash with a human so they will never fly in your face. And a bat will never willingly try to hurt a human.

If you have panic and anxiety anytime you might see a bat flying around in the evening or see them on TV or a film and would like to be in control of your emotions, get in touch and we will radically change your perception of bats. There is no need to live a life of fear when change can happen in only a few hours! Creature Courage phobia specialists!